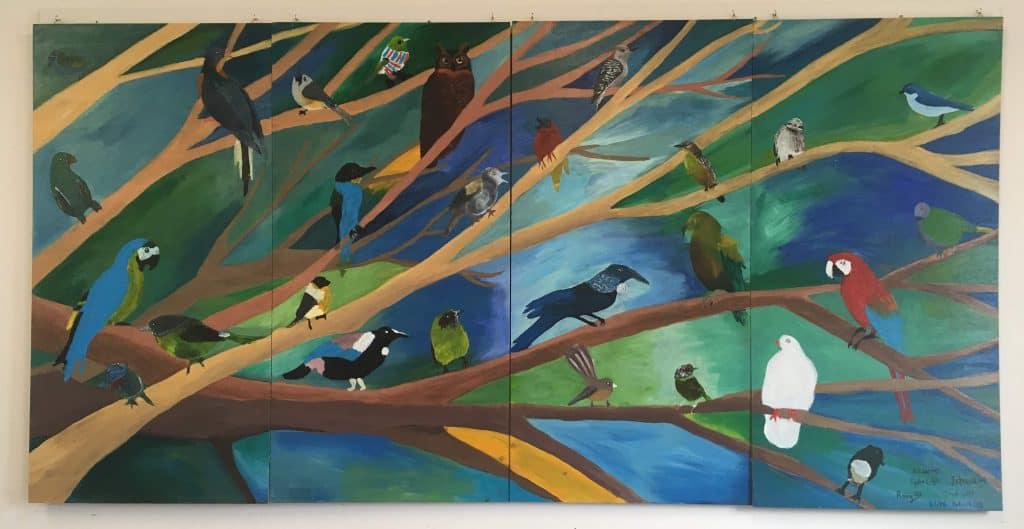 This is a mural sent to me by Rebecca Wilcox. She’s an artist and youth/family worker at Miramar Uniting Church in Wellington. You can see more of her art here. However this piece was not something Rebecca did alone, but more of a collaboration between her and some of the young people she works with. She drew the tree outline, and then gave her young people pictures of birds to be inspired by, or trace over. Over a series of after school sessions, this is the result. Its now hanging in the foyer of their church, and Rebecca reports that the young people are delighted to have contributed something that the congregation so obviously values.

This mural is inspired by Jesus’ parable in Mark 4:30-32. Jesus likens the Kingdom of God to a mustard seed, which in his story, grows to be big enough for all the birds to find a home in. This mural speaks of spaciousness, of diversity and richness in God’s new reality.

This Sunday’s gospel includes this parable and the one before it. There Jesus says the Kingdom of God is like a seed, which is planted and grows, even if the sower doesn’t know how it happens. This speaks of partnership, of doing what we can do and leaving the rest to God. In a way, this mural is something of a parable about that parable. Rebecca made a space where young people could contribute. She did what they could not to, and made it possible for them to bring their creativity to this painting. The result is beautiful, but also very different from what Rebecca would have done on her own. She said to me, ‘I had no idea what would happen, but the result is actually amazing!’

So it seems to be with God and God’s Kingdom. God makes a space for us to give what we have, to partner and contribute alongside Him and one another, so that our offerings are valued and realised. But we don’t ultimately carry the burden on growth or success. That mystery remains with God.

Finally this mural reminds me of something a good friend once said. ‘The best creativity always makes room for more creativity.’ This mural might have been a technically better painting if Rebecca had done it all herself. Instead she made space for more creativity beyond her own. Her space making, and her space-leaving were creative acts in themselves. By not making all the choices of where the birds would go and what colours they would be, she opened up those possibilities to others, who revelled in the freedom they’d been given.

So not only do we have a beautiful piece of art, but we have a piece that was itself the result of beautiful acts of creativity and hospitality. If you’d like to use this piece in your worship on Sunday, here’s a high res version.

There are further resources around Mark 4 over at the Illustrated Gospel Project.